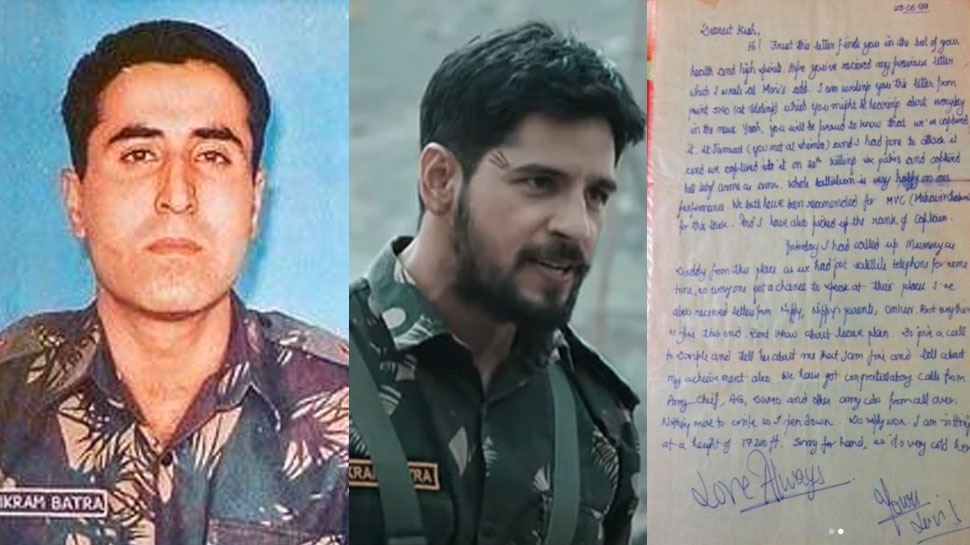 New Delhi: Bollywood actor Siddharth Malhotra’s film ‘Shershaah’ is getting a lot of praise from the public and critics. This biopic film of Captain Vikram Batra was released on the OTT platform Amazon Prime Video and with the release, the film has become a superhit. Siddharth played the role of martyr Captain Vikram Batra in the film.

Siddharth shared Captain Batra’s letter
After the release of the film, recently Sidharth Malhotra took time out to reach the War Memorial located in New Delhi and paid tribute to the Savannahs. After this, Siddharth Malhotra also shared the letter on social media that Vikram Batra wrote when he was present on the battlefield during the Kargil War.

This letter was written 15 days before death
The date of June 23, 1999 is lying on this letter. This is exactly 15 days before that when Captain Vikram Batra lost his life to protect the country. In his letter, Vikram Batra wrote, ‘I am writing this letter to you from point 5140, about which you must be hearing in the news everyday. Yes, you will be happy to know that we have captured it.

When Vikram got the rank of Captain
In the letter, Captain Batra wrote, ‘Lieutenant Jamwal and I had attacked it and captured it by killing Pakistanis. The entire battalion is very happy with our performance and our name has been sent for Mahavir Chakra. And with this I have also got the rank of Captain. Obviously Vikram was very happy on this day.

read this also: ‘Bhabiji is at home!’ K Manmohan Tiwari’s real wife looks amazing, photos will be left to see

IPL 2021: When, where and how to watch live telecast of Kolkata and Punjab matches, know full details

IPL 2021: Kolkata team is currently at number four in the points table. If she wins today's match, her chances of reaching...

Bhavana Pandey gives a glimpse of her cozy evening with kids Ananya, Rysa and hubby Chunky – Times of India

IPL 2019: Dinesh Karthik dominated social media due to his action in KKR vs RCB match, fans made funny comments

Will Divya Aggarwal be a part of Salman’s show after winning ‘Bigg Boss OTT’? said this thing

Jeans, a Garment that took Over the World!

Jeans, a garment; this piece of clothing is there in everyone's closet. A must pair of clothing from children to adults. When someone says...
Blog

Being feminist is the new fashion

Why Online Shopping is Best?