EducationPM Modi's address at UNGA: Read here the highlights of his address

PM Modi’s address at UNGA: Read here the highlights of his address 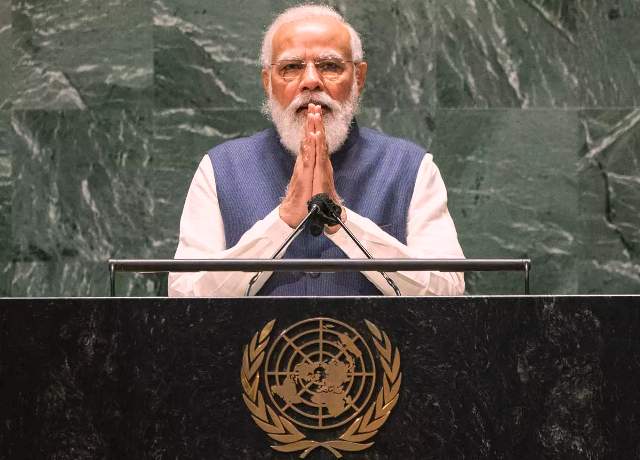 “I represent a country called the mother of democracy”, Prime Minister Narendra Modi said in a powerful and historic message to the world on September 25, 2021 at the 76th session of the UNGA. During his speech, the Prime Minister underlined the enduring and strong tradition of democracy in India which has drawn strength from the country’s diversity.

In his UNGA speech, the Prime Minister said that there is a need to stay away from the race of “expansion and boycott”. He also said that the priority of his government is that development should be all-inclusive, universal and nurturing for all.

He highlighted some of the major schemes of his government like Ayushman Bharat, PM Awas Yojana and PM Jan Dhan Yojana and along with this he also emphasized on the principle of ‘Antyodaya’.

The Prime Minister emphasized the need to strengthen the United Nations to protect the global order, global laws and global values, and called on the international community to strengthen the rules-based world order.

Prime Minister Modi while speaking on the situation in Afghanistan said that it is absolutely necessary to ensure that the Afghanistan region is not used for spreading terrorism and terrorist activities.

He also emphasized that the world should ensure that the soil of Afghanistan is not used to spread terrorism and terrorist attacks.

PM Modi stressed that, India’s belief of “serving the people” has invited global vaccine makers to come and make vaccines in India. India is working aggressively towards vaccine development and manufacturing.

India the mother of democracy

The Prime Minister also said that India is known as the mother of democracy, adding that “our diversity is the hallmark of our strong democracy”.

He further said that, as India enters its 75th year of independence this year, “Our diversity is the hallmark of our strong democracy. He further added that, COVID-19 has taught the world that, The global economy should now become more diversified and further that, the expansion of the global value chain is important in this regard.

shared heritage of the oceans

PM Modi also highlighted that oceans are a “common heritage” of all of us and these oceans are also the lifeline of international trade and we have to save them from the race of expansion and exclusion.

The Prime Minister concluded his speech by quoting Nobel laureate, Rabindranath Tagore, “Keep moving fearlessly on the path of your good deeds. May all weaknesses and doubts be removed”. He further said that, this message is relevant for the United Nations in today’s context because it is relevant for every responsible country.

Prime Minister Modi arrived in New York on September 24, 2021 for the last leg of his US visit. He arrived in Washington on September 22 for a three-day visit to the country, which began with talks with five global CEOs and US Vice President Kamala Harris. He also held his first bilateral meeting with US President Joe Biden and attended the first in-person Quad summit.

ICC banned Roy Kaia, know why he got such a big punishment!