BollywoodNCB raids on rave party going on in cruise ship in Mumbai,... 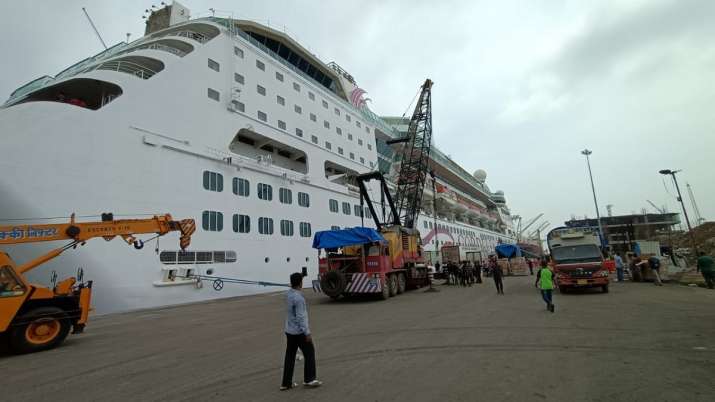 Narcotics Control Bureau (NCB) raided a passenger cruise ship on Saturday evening where the party was going on and drugs were being consumed in it. A senior police officer gave this information. He told that this ship was about to go to Goa and there were hundreds of passengers on it. High profile people have been detained in this raid. Drugs were being used in this party, but at the right time, the NCB team reached the cruise and many people were taken into custody red handed from the rave party. It is being told that high profile people from many big cities including Bollywood and Mumbai were involved in this rave party. The NCB team also seized a huge amount of drugs being used in the rave party on the cruise. NCB will present the accused in the court today.

On receiving a tip-off about a party being on the ship, the NCB team conducted a raid. Prohibited narcotics were recovered from some of the passengers, the official said. No passengers were allowed to disembark from the ship. The matter is under investigation.

Nigerian actor arrested in Karnataka with drugs worth Rs 7.5 lakh

According to ANI, at least 10 people have been detained during a raid at a party organized on a cruise in Mumbai.

Samir Wankhede, Zonal Director, NCB, Mumbai said, “We have caught some people. Investigation is going on. The drugs have been seized. We are investigating 8-10 people. Sameer Wankhede asked “Was any celebrity present at the party?” When asked, he said, “I can’t comment on it”.

According to the information, this cruise was going to roam inside the sea for two days. It was a 2 day trip from Mumbai to Goa. More than 1500 people were invited for this. His booking was done online. An amount ranging from 80 thousand to 1 lakh rupees was taken from them. Many musicians were also going to perform in it. For this reason, this party was called a music event.

According to NCB sources, the drugs that have been recovered from the cruise ship include drugs like heroin, MD, hashish and cocaine. NCB has found leads of 18 drug peddlers who are suspected of supplying drugs to the rave party of this cruise. After tightening the noose on the accused who took drugs from the party, now NCB is looking for these drug peddlers.

Jubin Nautiyal sang the song of Shershaah’s film while sitting on the boat, watch video

Shatrughan Sinha: Some people have got a chance to settle scores with Shah Rukh, through Aryan Khan – Exclusive! – Times of India

Arshad Warsi reacts to John Cena sharing his transformation photo on Instagram, says he is ‘quite kicked’ – Times of India