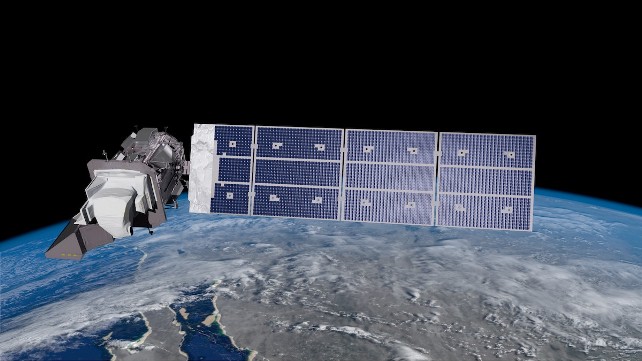 The US National Aeronautics and Space Administration (NASA) launched a powerful satellite Landsat 9 on 27 September 2021 at 11.41 pm Indian time. Along with this, four small satellites have also been launched. This launch was done from the Atlas V rocket from the Space Force Base in California.

NASA’s new Landsat 9 satellite along with its partner Landsat 8 will monitor the health of our planet by taking pictures of the entire Earth every 8 days. At present, the earth is facing the dangerous side effects of climate change. Observations from space may help in finding a better view of evolution.

NASA says that satellite information has also proved helpful to farmers in deciding better and useful crops. Apart from this, free information will prove helpful to many countries in better use of their agricultural resources.

NASA has sent a powerful and advanced satellite into space. Its job is to monitor the earth. Landsat 9’s job is to help its partner satellite Landsat 8 by reaching space.

Help to know the effects on Earth

Satellites will collect pictures of the planet by making one revolution of the Earth every 99 minutes and 14 revolutions every day for these eight days. These photos will be added to the data sets that have been available to people for 50 years for free. NASA says the capabilities of medium resolution images will help researchers identify signs of human activity and their effects on Earth.

Landsat 9 is an advanced technology advanced satellite which is the ninth satellite of its series. It will be operated by NASA Goddard Space Flight Center and has two instruments. The Operational Land Imager 2 will take images of Earth in visible, near-infrared and shortwave infrared light. At the same time, Thermal Infrared Sensor 2 (TIRS-2) will study the temperature of the Earth’s surface areas.

Help to understand all the changes

Landsat 9 is a joint mission of NASA and the US Geological Survey, which has been helping to understand Earth’s processes and their many changes over the past five decades. The Landsat series has measured many changes such as the speed of glaciers in Antarctica, the amount of water used for agriculture, deforestation in the Amazon forests, etc.

At present, NASA’s Landsat 7 and Landsat 8 satellites are in operation and their orbit pattern is every 16 days, so that the picture of every place of the Earth is taken every 8 days. NASA says that Landsat’s instruments revolve around the Earth, taking pictures of 185 kilometers long at a time. Its each pixel is 30 meters big.

When was the first Landsat launched

NASA launched the first Landsat in the year 1972. Its name is Earth Resource Technology Satellite which took 8 million pictures of the Earth. NASA says that these satellites give scientists a global view of the changing Earth.

Share
Facebook
Twitter
Pinterest
WhatsApp
Previous articleWorld Heart Day 2021: Know why World Heart Day is celebrated and what is its importance
Next articlePM Modi dedicated 35 crop varieties with special qualities to the nation, know in detail

Fast growing technology in the field of communication system

Shoaib Akhtar wanted to break this batsman’s head with a cricket bat, the joke became the root of the controversy

Mallika Sherawat took off her clothes and took a sunbath, the photo quickly went viral

Bowler hitting Bumrah’s head inverted, may be out of the third test