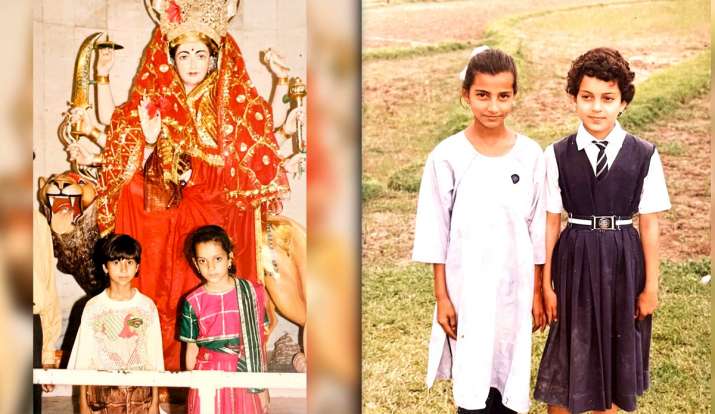 bollywood actress Kangana Ranaut She is very active on social media. His posts are also well liked by the fans and also become viral on sight. Now she has shared two unseen childhood photos on Instagram, which are very cute. In one picture she is seen in school dress and in another photo she is standing in front of the idol of Durga Mata.

Kangana Ranaut has shared her childhood picture, in which she is seen in school dress. He wrote in the caption- ‘Small school in the valley called Hill View… Year 1998 Himachal Pradesh.’

Photo: Hema Malini-Kangana Ranaut spotted at the airport, these stars were also spotted

The actress shared another childhood picture, in the caption of which she wrote – ‘Ek aur ratna mila ha ha…From school picnic to temple complex…Jai Mata di’. The reactions of the fans are also coming out in these pictures.

On the work front, Kangana’s ‘Thalaivi’ has been released recently. Apart from this, she will be seen in the role of a fighter pilot in the film ‘Tejas’. The Indian Air Force was the first defense force in the country to induct women in combat roles in 2016. The film takes inspiration from the historical event. Tejas is directed by debutant Sarvesh Mewar. The film will be RSVP’s second film to honor the Indian Army after the hugely successful film ‘Uri: The Surgical Strike’ which released in January 2019.

Kangana recently announced the upcoming mythological film ‘The Incarnation-Sita’ in which she will be seen playing the role of Goddess Sita. The film will be directed by Alokman Desai and will reportedly release in five languages ​​- Hindi, Tamil, Telugu, Malayalam and Kannada.

Video: As soon as Rishabh Pant was dismissed, Kohli’s face rang 12, gave such a reaction

Mohammed Shami used to upset this girl by sending a message? Screenshots of chats that went viral