IPL 2021: Shikhar Dhawan was seen having fun with son Zoravar, told the best part of the day 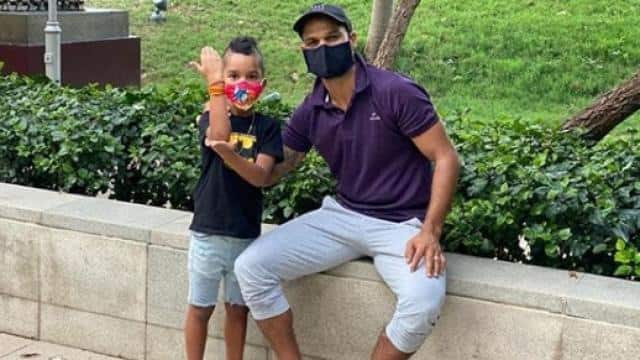 Ever since Indian team opener Shikhar Dhawan got divorced from his wife Ayesha Mukherjee, he has been in constant discussion. Dhawan-Ayesha have a seven-year-old son named Zoravar. Dhawan often keeps having fun with Zoravar and shares his pictures and videos on social media. Dhawan is currently in UAE, where he is preparing for IPL 2021. Dhawan spoke to the UAE on a video call with his son Zoravar and also shared a photo of it on social media.

Dhawan has shared this photo on his Instagram story. In this, the father-son duo is seen kissing each other. In its caption, Dhawan wrote, ‘Most special part of my day.’

IPL 2021: Akash Chopra furious over the withdrawal of the names of English players from IPL, said – will have to bear the brunt of it in future

Let us tell you that Dhawan-Ayesha got married in the year 2012. Ayesha also has two daughters from her first marriage. Dhawan had shared a post on social media after his divorce from Ayesha, in which it was written, ‘Keep laughing because this is your biggest strength’. This post of Dhawan can be understood as a reaction to their divorce and not being named in the T20 World Cup.

There were already reports of souring in Shikhar and Ayesha’s relationship. Both had also unfollowed each other on social media some time back. As soon as the news of divorce started spreading after Ayesha’s post, Shikhar Dhawan also posted a post, but he did not write a word on the divorce. He put a photo of himself in the IPL jersey and wrote, ‘It takes full life, understanding and heart to achieve any position. You should love your work, only then you get blessings and you also get fun. Work hard to make your dreams a reality.