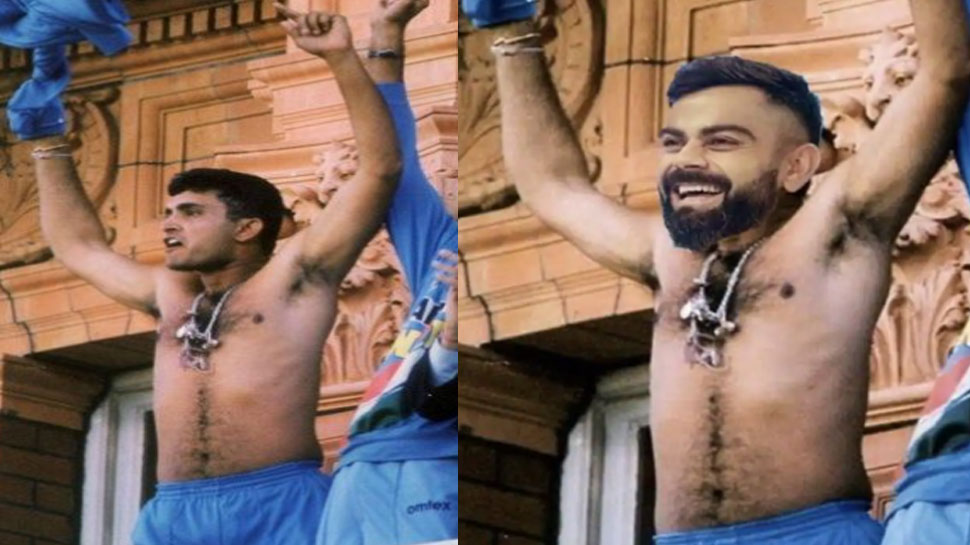 New Delhi: In 2002, when the Indian team defeated England in a thrilling match in the NatWest Trophy final, the team’s captain Sourav Ganguly celebrated by waving his T-shirt on the balcony of Lord’s. Yesterday, under the captaincy of Virat Kohli, India once again defeated England in a historic match. At the end of this match, a photo of Virat Kohli is becoming fiercely viral on social media.

In the 2002 NatWest Trophy final, the Indian team defeated England by 2 wickets in a very exciting match. Team captain Sourav Ganguly took off his T-shirt and waved it in the air as soon as he achieved this victory. The euphoria of that historic victory achieved at Lord’s has not been able to get out of the hearts of the people till date. One such special moment was also seen when Team India defeated England yesterday.

Team India beat England by 151 runs in Lord’s Test. The hero of this match was the bowler of India. Team India’s fast bowlers dismissed the entire English team in just two sessions. For India, Mohammad Siraj once again took 4 wickets. At the same time, Jasprit Bumrah took 3 wickets in his name. Apart from this, Ishant Sharma took 2 and Mohammed Shami took 1 wicket. With this win, Team India has gone 1-0 up in the series.

Shami and Bumrah became the heroes of victory

In the first session of the fifth day, the brilliant batting of Jasprit Bumrah and Mohammed Shami almost dragged the match out of the hands of England. Actually, between these two players, a total of 89 runs for the 9th wicket partnership. Shami returned unbeaten on 56 and Bumrah 34. These two players took India’s lead to a total of 271 runs.

Share
Facebook
Twitter
Pinterest
WhatsApp
Previous articleIND vs ENG: This player’s card will be cut from the third test! Won’t get a chance even after winning at Lord’s
Next articleThis is India’s most educated cricketer, degree such that one can get a job in NASA comfortably

Tahira Kashyap was admitted to the hospital after drinking bitter gourd juice, shared the video and told the whole thing

Bharat Bandh: Know what is the effect of Bharat Bandh, there was heavy jam here

IPL 2021: RCB captain Virat Kohli shared the video of the practice session, Shahid Afridi made such a comment that went viral