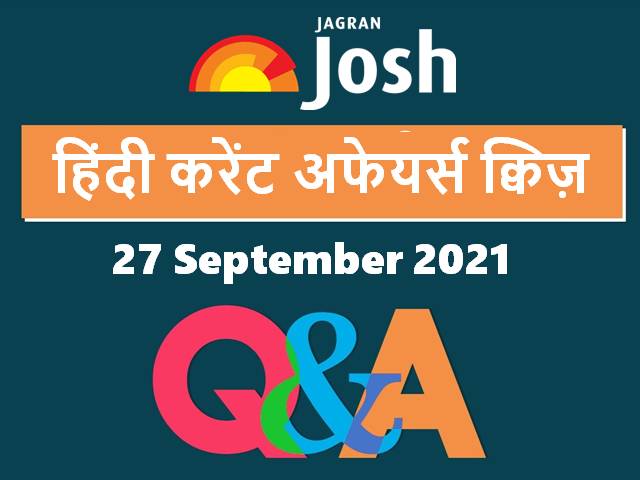 2. Who among the following has become the first Indian player to score 10,000 runs in T20 cricket?
a. Virat Kohli
b. Suresh Raina
c. Rishabh Pant
d. Shreyas Iyer

3. Which state’s Sojat Mehndi has been given GI tag by the government?
a. Punjab
b. Delhi
c. A state in Eastern India
d. Rajasthan

6. Which of the following state is going to host the Men’s Junior Hockey World Cup?
a. A state in Eastern India
b. Punjab
c. Odisha
d. Tamil Nadu

1. b. 27 September
World Tourism Day is celebrated every year on 27 September. The sector that has suffered the most after the start of the Corona epidemic is the tourism sector. Through tourism we get to know about other places, civilizations and cultures. The main objective of celebrating World Tourism is to highlight the global importance of tourism as a tool for global development and cultural knowledge.

2. a. Virat Kohli
Virat Kohli has created history in the ongoing match against Mumbai Indians on 26 September. He has become the first Indian batsman to complete 10,000 runs in T20 format. Kohli is the fifth player in world cricket to do so. Before him, Chris Gayle and Kieron Pollard of West Indies, Shoaib Malik of Pakistan and David Warner of Australia have done this feat. Rohit Sharma is the highest run-scorer in T20 for India after Kohli.

3d. Rajasthan
Rajasthan’s ‘Sojat Mehndi’ has got Geographical Indication (GI) status from the government. GI status helps the manufacturers of the product to get higher prices and no other manufacturer can use this name to market their products. Usually this status assures name, quality and uniqueness, which is mainly due to its place of origin.

5. b. two thousand billion dollars
Union Finance Minister Nirmala Sitharaman said that India has set a target of exporting two thousand billion dollars by the year 2030. The Finance Minister said that the way the country’s economy is moving towards a new direction and the way the industry is adopting new things, many new challenges have arisen. In view of this, India not only needs more number of banks but more big banks.

6. c. Odisha
Odisha will host the FIH Men’s Junior Hockey World Cup from November 24 to December 5. Chief Minister Naveen Patnaik announced this. Addressing a special program organized here for the purpose, Chief Minister Naveen Patnaik said that recently Hockey India had approached the state government to extend support for the Men’s Junior Hockey World Cup to be held in two months. Lucknow hosted the last edition of the tournament in 2016.

7. d. China
China’s central bank has declared all transactions made in virtual currency, including bitcoin, illegal. China has taken this step to discourage the use of unauthorized digital money. The handling of cryptocurrency by Chinese banks was banned in 2013, but the government issued a reminder again this year. The Reserve Bank of India can bring a model of digital currency by the end of this year. Central bank deputy governor T Ravi Shankar said the central bank is assessing the possibilities of introducing digital currency.

8. a. 267
Recently, the Botanical Survey of India has added 267 new species to the country’s flora in its new publication Plant Discovery, 2020. Earlier, the United Nations Convention on Biodiversity had demanded an additional 200 billion US dollars to developing countries from various sources to manage nature by the year 2030.

WHO approves the world’s first malaria vaccine, so many millions of people die every year

Govinda’s wife lashed out at Kashmira Shah, said- ‘Battles started as soon as the bad daughter-in-law came to the house’

Sehwag was slapped by this person, so Ganguly lost his cool and took this big step

Ordnance Factory Board of India has been dissolved, will be divided into 07 new corporate entities