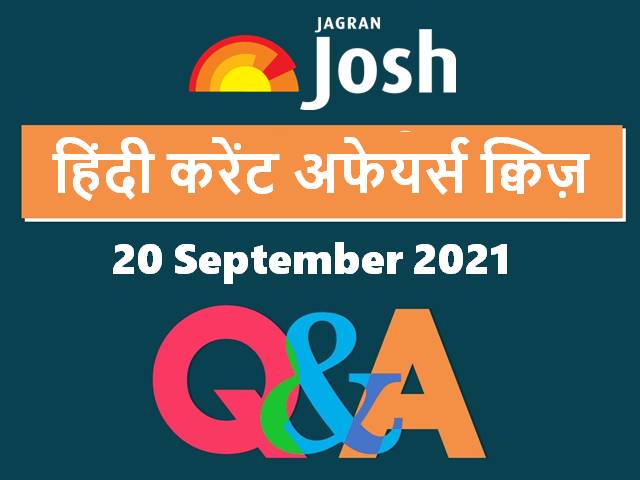 1. Who among the following has become the new Chief Minister of the state after the resignation of Punjab Chief Minister Captain Amarinder Singh?
a. Charanjit Singh Channi
b. Dr. Amar Singh
c. Ravneet Singh Bittu
d. Sukhbir Singh Badal

Who has been announced as the Director of Public Policy by Facebook India?
a. Manoj Agarwal
b. Rajiv Agrawal
c. Pramod Tripathi
d. Rahul Sachdeva

3.The Hindu University of America has conferred an honorary doctorate in Hindu studies to which of the following actors?
a. Amitabh Bachchan
b. Shahrukh Khan
c. Anupam Kher
d. Ajay Devgn

4. Which of the following state government has announced to rename Chhindwara University after Raja Shankar Shah University?
a. Madhya Pradesh
b. A state in Eastern India
c. Punjab
d. Tamil Nadu

Which woman military commander has been handed over the command of RCC company by the Border Roads Organization (BRO) for the first time?
a. Major Komal
b. Major Priyanka
c. Major Mirror
d. Major poem

6.Which of the following England’s legendary footballer has passed away at the age of 81?
a. Jake Butland
b. Jordan Pickford
c. Nick Pope
d. Jimmy Greaves

2.b. Rajiv Agrawal
Facebook India said it has appointed former IAS officer and former Uber executive Rajiv Agarwal as its director of public policy. He will succeed Ankhi Das, who quit in October last year after being embroiled in a controversy. In this role, Agarwal will work under Ajit Mohan, Vice President and Managing Director of Facebook India and will be part of the Indian leadership team.

5.c. Major Mirror
In order to promote women empowerment, for the first time, the Border Roads Organization has entrusted the command of its RCC company to a woman military officer. On behalf of the organization, Major Aina has been entrusted with the command of the RCC company of Dehradun. Captain Anjana, AEE Bhavna Joshi and Vishnu Maya have also been appointed under the leadership of Major Aina.

6.d. Jimmy Greaves
England’s legendary footballer and striker Jimmy Greaves has died at the age of 81. He started his career with Chelsea and was successful in scoring in the debut match itself. He scored a record 124 goals for the club from then 1957-1961. He appeared in 379 matches for Tottenham from 1960–71, scoring 266 goals. He scored 44 goals in 57 international appearances for England.

8.b. March 31, 2022
The central government has once again extended the last date for linking Aadhaar with PAN card. Earlier its last date was 30 September but now it has been extended till 31 March 2022. PAN card will be declared inoperative if Aadhaar-PAN is not linked by this date. The Central Board of Direct Taxes (CBDT) said in a statement that keeping in view the problems being faced by various stakeholders due to the Kovid-19 epidemic, the deadline has been extended, which will ease compliance.

Dimple Cheema was about to get married as soon as Vikram Batra returned, had made all the preparations to become a bride

IPL Final CSK vs KKR: Will Andre Russell be able to play in the final match, know his health update

ENTERTAINMENT TOP-5: From the death of Pakistani actor Umar Sharif till the announcement of the film ‘Godse’…

Ordnance Factory Board of India has been dissolved, will be divided into 07 new corporate entities