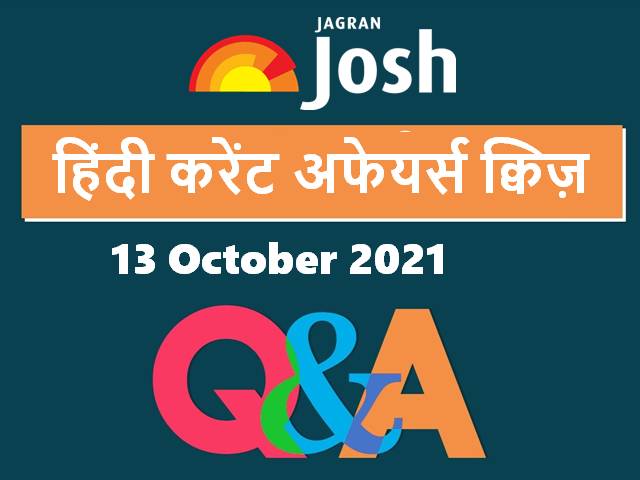 1. Who among the following has been appointed as the new Joint Secretary in the Prime Minister’s Office (PMO)?
a. Ashok Kumar
b. Mira Mohanty
c. Pramod Agarwal
d. Mohan Seth

2. Which High Court has dismissed the petition challenging the appointment of Rakesh Asthana on 12 October 2021?
a. Delhi High Court
b. Allahabad High Court
c. Patna High Court
d. none of these

3. Which of the following country launched the world’s first self-driving train?
a. India
b. Pakistan
c. Germany
d. Bangladesh

5. Who among the following has been appointed as an advisor to Prime Minister Narendra Modi?
a. Amit Khare
b. Satyendranath Rai
c. Girish Kumar Mishra
d. Deepak Gupta

7. The International Monetary Fund (IMF) has estimated India’s economic growth rate to be what percent in this financial year?
a. 6.5 percent
b. 9.5 percent
c. 4.5 percent
d. 5.5 percent

8. International Day for Disaster Reduction is observed on which of the following day?
a. January 10
b. March 12
c. 13 October
d. July 20

1. b. Mira Mohanty
The Central Government has appointed Mira Mohanty as Joint Secretary in the Prime Minister’s Office (PMO). At the same time, Ritesh Chauhan has been appointed as the Chief Executive Officer (CEO) of Pradhan Mantri Fasal Bima Yojana. Meera Mohanty, a 2005 Himachal Pradesh cadre officer of the Indian Administrative Service (IAS), is currently the Director in the PMO.

2. a. Delhi High Court
The Delhi High Court has dismissed the petition challenging the appointment of Rakesh Asthana on 12 October 2021. The High Court was hearing the matter for a long time. Earlier, Delhi Police Commissioner Rakesh Asthana had alleged that some organizations were targeting him ever since he was appointed as the special director of CBI. Rakesh Asthina was made the police commissioner of Delhith a few days before his retirement.

3. c. Germany
German rail operator Deutsche Bahn and German engineering company Siemens launched the world’s first automatic and driverless train on 11 October 2021 in the German city of Hamburg. This self-driving train was launched in the city of Hamburg. This train is more punctual and energy efficient than the conventional trains. These trains will start carrying passengers from December on the existing rail infrastructure.

4. b. Rajasthan High Court
Rajasthan Governor Kalraj Mishra administered the oath of office to Justice Akil Qureshi as the new Chief Justice of the Rajasthan High Court. The swearing-in ceremony took place at the Raj Bhavan. Aqeel Qureshi took the oath of office in English. He has replaced Indrajit Mahanti in this post. Indrajit Mahanti has been appointed as the Chief Justice of the Tripura High Court.

6. d. two years
RBI has banned Srei Infra’s auditor Haribhakti & Co LLP from carrying out any audit related work for two years. The ban will start from April 1, 2022. The central bank said that action has been taken for non-compliance of a specific direction issued regarding statutory audit of important NBFCs. This is the first time that the central bank has taken such action against a systemically important NBFC auditor.

7. b. 9.5 percent
The International Monetary Fund (IMF) has said that India is the world’s fastest growing major economy with a growth rate of 9.5 percent in this fiscal year (Fy 2021-22) and 8.5 percent in the next fiscal. shall remain. After India, good economic condition has been predicted in Spain. Last year there was a minus 10.8 per cent growth, which is projected to improve to 5.7 per cent in 2021 and 6.4 per cent next year and is considered to be the second best improvement after India.

8. c. 13 October
International Disaster Reduction Day was observed on 13 October across the world. This day encourages the citizens and the government to build a disaster free society. Its main objective is to reduce disaster risk and create a safe community. In the year 1989, the United Nations had announced to celebrate the second Wednesday of October every year as this day, but later on 21 December 2009, the United Nations announced to celebrate 13 October every year as this day. .

World Maritime Day 2021: Theme of the day, history and significance for the maritime industry

The world’s most dangerous bowler suddenly retired, fans were disappointed